After a Prologue featuring characters representing Nature, Eternity and Destiny, ACT ONE begins as Jupiter comes down to earth to restore order after a war. He’s immediately struck by the beauty of Calisto, a nymph. Unfortunately for the amorous Jupiter, Calisto is a follower of the virgin goddess Diana — and has taken a vow of chastity.

This presents an obstacle to Jupiter’s immediate objectives. So his son Mercury suggests that Jupiter use his powers to take the form of Diana. He does this and fools Calisto, who must obey Diana’s every wish. This sets up a rather kinky encounter between the nymph and Jupiter — who at this point is basically a god in drag.

Diana, the virgin goddess herself, is also falling in love, with the shepherd Endimione. As she agonizes over this, with her prudish companion Linfea, Calisto reappears.

Not knowing that the “Diana” she was just cavorting with was an imposter, Calisto approaches the goddess and tells her how much she enjoyed their little get-together — describing it in intimate detail. But this real Diana has no idea what Calisto is talking about. Instead, she’s appalled by what she’s hearing and sends the nymph away. Linfea then has her own encounter with lust, in the shape of the satyr Satirino, barely escaping his vulgar advances.

Another satyr, Pane, finds that he has also fallen for Diana — but he knows that she’s in love with someone else, so he’s depressed. As the first act ends, his satyr friends scheme to find Diana’s lover and put him out of the picture.

In ACT TWO Jupiter’s wife, the goddess Juno, comes down from the heavens to check up on her husband. Calisto guiltily admits that she’s been intimate with Diana. Juno suspects the “Diana” in question must have been Jupiter in disguise — and finds out she’s right when the phony Diana shows up again with an eye for Calisto.

To make things even more complicated, Endimione turns up and tries to press his own advances on the figure he thinks is Diana, but is actually Jupiter. Naturally, he doesn’t get too far.

The satyr Pane has been watching the whole thing. He still wants Diana for himself, and now he knows for sure that she’s been carrying on with Endimione. Pane and his band capture Endimione and torture him. In the process, the satyrs mock true love in favor of relationships a bit more earthy and a little less dangerous. And even Diana’s chaste companion Linfea seems ready for some uncomplicated pleasure.

As ACT THREE begins, Calisto reminisces about the pleasure she thought she had shared with Diana. She still doesn’t know that the “Diana” who seduced her was actually Jupiter in disguise, and now she suffers the consequences.

Calisto is confronted by Juno, along with two hideous furies from the underworld. Juno’s punishment for Calisto is to turn her into a bear. Jupiter now admits that he really does love Calisto, but even his power can’t undo Juno’s curse.

Meanwhile, the real Diana remains the object of many desires: She has fallen even more deeply for the contemplative young shepherd, Endimione, and the satyr Pane also wants her — though for less spiritual reasons. But eventually, Pane and his crew grow disgusted by the genuine affection between Diana and Endimione, and decide to leave the lovers to their fate.

Jupiter then decides that while he can’t break Juno’s spell and change Calisto back into a nymph, he can save her from wandering the woods as a bear. First, he gives her a brief time on earth. Then, as the opera ends, Jupiter sends Calisto into the heavens, to the constellation of Ursa Major. There, she can live forever as a star, enjoying the celestial harmonies. 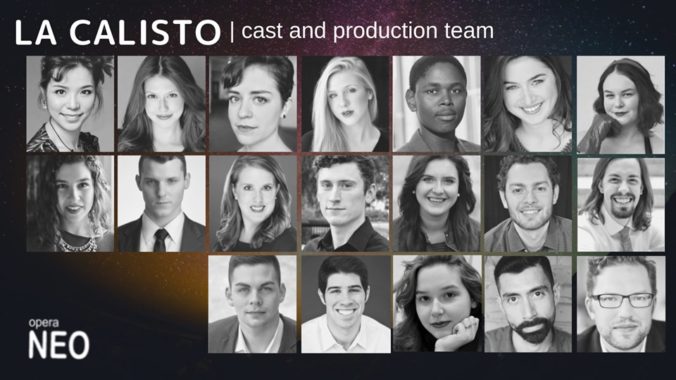 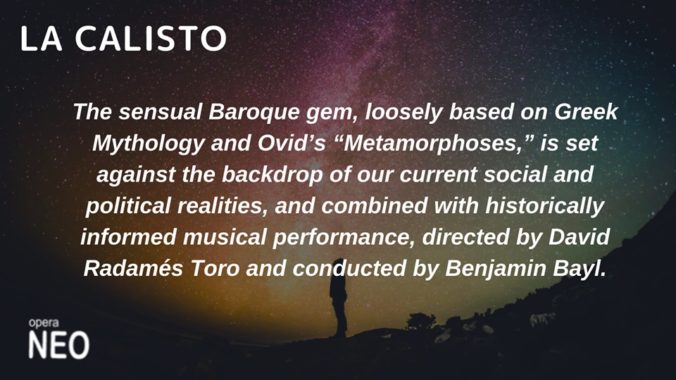 "Mezzo-soprano Kira Dills-DeSurra as Diana is both a nuanced singer and talented comedic stage actress"
- Pam Kragen, The San Diego Union-Tribune
"I hope that mezzo-soprano Kira Dills-DeSurra is receiving double pay for singing with such panache the role of Diana as well as the trouser role of Jove disguised as Diana. Romancing Endimione, she floated fluttery, romantic serenades, but as Jove in disguise, she gruffly enticed the unsuspecting Calisto with a completely different timbre."
- Ken Herman, San Diego Story